>>PressOne way to see the city of Bilbao 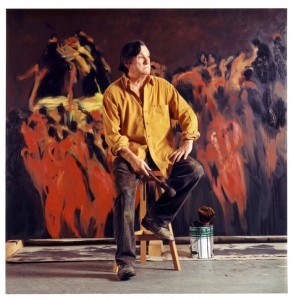 One way to see the city of Bilbao

The Mural of Bilbao, designed and made by Iñaki García Ergüin, has a height of 2.5 m and 5.25 m wide. From the viewpoint of Artxanda, the artist collects from a far the description of a city where their places are more representative.

• Specialized in different themes, Garcia Ergüin will present the mural, which is his latest art project, which includes their vision and look of a city from a distance, with the addition of areas, buildings and areas of interest.

• For the artist, “represents the port of Castilla, and a sense of continuity in a work that shows the evolution of the city in recent years, their change, changes, tweaks and amplitude of an abstract mass which as you approach the same, look the most representative churches, Arc of San Mames or the various bridges and museums”.

• Throughout the year 2013, Garcia Ergüin is working on other projects and interest in conducting a review and synthesis of his career, which began in 1948 with the first sketches, drawings and watercolors.

Bilbao, February  17 th, 2013. One of the most anticipated works by painter García Ergüin will be presented on Thursday February 21, 2013 on Viviendas de Vizcaya. This time, the theme has been the creation of a mural on the city of Bilbao, which has a height of 2.5 m and a wide of 5.25 m.

Also, for the project, the artist has specified five boards and employee phenolic compounds ocean, and chose acrylic paint to achieve the desired goal. Furthermore, from the viewpoint of Artxanda, Garcia Ergüin has clarified that “I have found necessary to capture the view from left to right and right to left the set of Bilbao, to highlight the city as a point of reference port, receiving a set important details, as you approach the wall”.

Day and night, as reported by the artist, “you can see the work as it has special lighting adjusted to enhance viewing, and in order that no shadows and clarity prevails, according to the time or season”. In the project, the painter reflected “an interest early on in the world of photography and composition, and highlights the abstract mass of gray and pink, which has appeared in a set of tables that retrieve the icons of an illustrious city”.

Furthermore, throughout the year 2013, Garcia Ergüin, is working on digitizing all his work, and thematic collections, gathering and storing the information most important of his career. Thus, already has and is present in most of communication platforms and social networks, without neglecting its new website, Blog and management tool in the cloud.

Ergüin Garcia is one of the most important creators of Basque cultural landscape of the twentieth century. In the decade of the 50s was a pupil of Lorenzo Jose Solis. He studied at the University of Munich on a scholarship that enabled him to make contact with German Expressionism and particularly with the work of Anselm Kiefer, an author who was identified from the first moment thanks to their color palette “simple and elegant”.

Participate in the creation of the Emen in 1966 with Jose Maria de Ucelay, Agustín Ibarrola and Olartúa Pelayo. Since his first solo exhibition in 1960 at the gallery of Bilbao Arthogar his work has been shown in many exhibitions in Spain, France, United States, Czech Republic, Poland, Germany, Switzerland, etc. Ignacio García Ergüin is a well-established painter and a large projection abroad.

Her work also includes set designs for opera and murals for various institutions such as those made for the Athletic Club or the porch of the Church of San Anton in Bilbao. Since his work was seen for the first time in the American Museum in Vitoria, Ergüin Garcia has exhibited in the most prestigious institutions in the world and his paintings and prints are in collections as important as the Reina Sofia Museum in Madrid, the Fine Arts of Bilbao and the International House in New Orleans.

With a style based in expressionism, Garcia Ergüin in many cases approaches to abstraction. In its thematic landscape and usually appears holidays and traditions with the particularity that usually perform monograph series on a subject trying to deepen in all possible variations.

**Note: To request interviews, images or additional material, may apply to phone and e-mail them leave then.

Trackback from your site.

This information box about the author only appears if the author has biographical information. Otherwise there is not author box shown. Follow YOOtheme on Twitter or read the blog.